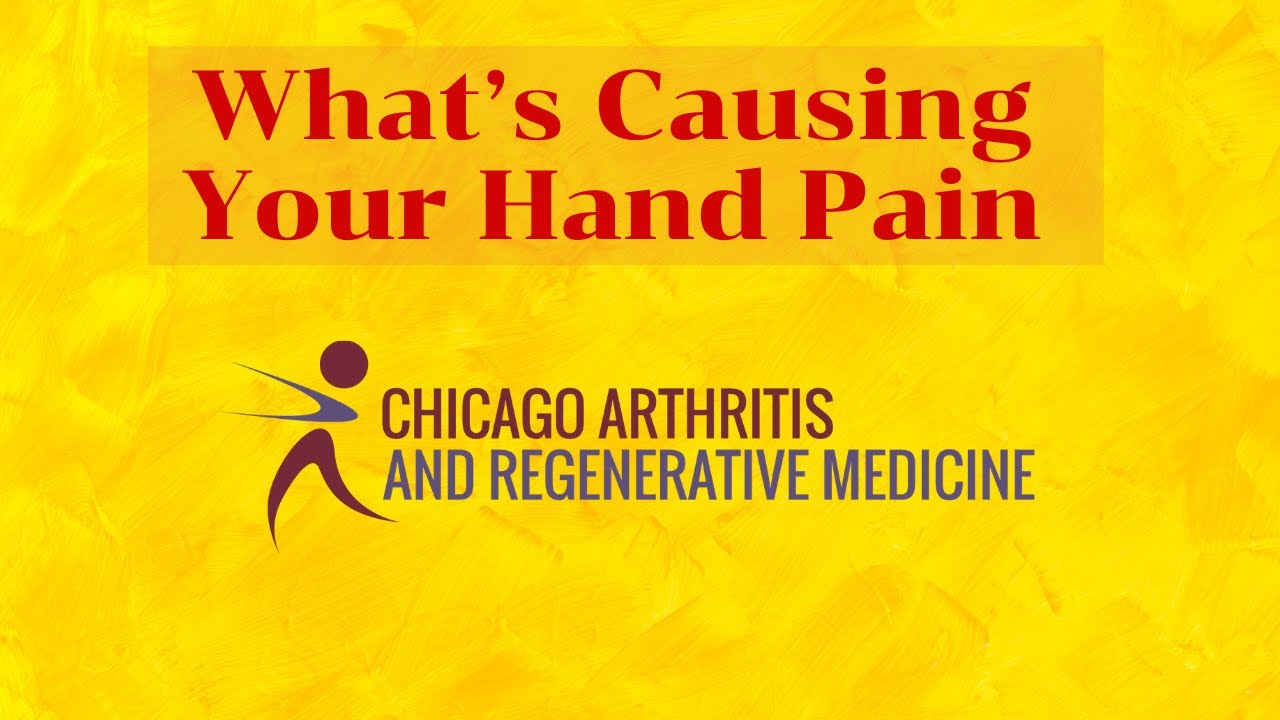 What’s Causing Your Hand Pain?
Pain in the hand, in particular the thumb, is fairly common. Texting, mobile phones, and work make thumb and hand pains more common. In this video I discuss how I approach diagnosing what is causing your hand pain. Topics discussed:
-Instability
-Inflammation
-Diagnostic musculoskeletal ultrasound

Hello everyone. This is Siddharth Tambar from Chicago Arthritis and Regenerative Medicine. Welcome to our Wednesday live stream. It’s October 21st, 2020, and excited to be here. Today we’re actually live streaming on Facebook, YouTube, Twitter, and IG. This is a technical marvel that I’ve been able to work this.

Today I am talking about something that I see really frequently which is hand pain. As a clinical rheumatologist, I get referred a lot of patients for hand pains in large part because inflammatory arthritis conditions including rheumatoid arthritis, psoriatic arthritis can frequently drive pain and swelling in the hands. So hand pains are a really common issue that I see. I had a patient earlier this week where I think understanding how to evaluate hand pains can clarify some things.

The interesting thing is that I think hand pains are becoming more common or more readily recognized for a few different reasons. Number one is because of the way that we all live, in the sense that we’re all constantly using our hands either on the computer, a laptop our mobile devices to constantly be texting emailing, and just doing kind of all of our work on the phones nowadays. It stresses our hands in different ways than what we’re used to traditionally. certainly I think texting thumb is starting to become a really common issue. so it’s something that I see a lot. I think on top of that is frankly, I’m more aware of hand issues, not only from a professional standpoint, but even personally since I do a lot of regenerative medicine injections you start to develop more discomfort over the thumb as well as you’re putting stress on that joint also. So hand pain is a very common issue and one that I think is interesting to talk about.

In the recent case of the patient that came to me, he was coming in with basically a history of progressive pains in both of his hands but really worse in both of his thumbs. He had had some x-rays done. He had also had some labs done and they were both benign. So the question was, what’s going on with his hands? So I always think of joint issues first and foremost, as what’s going on from an inflammation and instability standpoint. The reason why is because, that sort of sets me on a path of evaluation about how I want to look at that. There’s other issues that you have to look at as well, which I’ll mention but inflammation, instability are always key.

Instability is key because that is what really drives the overall degenerative process that you see in a lot of musculoskeletal conditions, including wear and tear arthritis, tendonitis, trigger finger, things like that. So instability, you make that evaluation and call based on what are you’re seeing in terms of examination findings, and what you’re seeing on ultrasound. So on examination findings, if there’s any evidence of increased mobility, laxity on exam, that can be a clue that maybe there’s some instability here. If someone comes in with a history of listen, I feel fine first thing in the morning, but as the day goes on, then as I’m using my hands more, it starts to hurt more, it’s a sign of instability in that joint likely. So that should clue you in that there may be a progressive stress issue, instability issue here. Then the last one is ultrasound. You need to be doing ultrasound and ultrasound to look for instability is fantastic.

In the case of this patient that I saw, he had x-rays that were normal and his examination was relatively normal, but on ultrasound, he had a little bit of instability, a little bit of laxity in one of his thumb joints. To me that is essentially diagnostic along with the other negative testing in terms of labs and all that, that here’s someone that has some early instability and degenerative process and stress developing in that joint. When you can make that kind of call, you can then start to guide somebody in terms of how to get them on the path to getting pain, relief, functional improvement and then hopefully also preventing this from progressing.

Ultrasound to me is key because it lets me go from a good physical exam. That’s very helpful and gives me some clues to then looking layers and layers deeper inside the body at the tendon, at the joint, at the ligaments, and give you a more accurate sense for is there any more definitive evidence of inflammation, soft tissue injuries, instability issues. X-rays, can’t give you that. It’s the reason why x-rays did not show his issue in my patient’s case, because x-rays don’t look at inflammation. X-rays are generally not so great at looking for instability because of how they take the x-rays. If you only take a static x-ray and that means you just, you take your hand and you just take a shot of that, then that’s a static image. It doesn’t show instability. On the other end, if you took a shot of your thumb moving, you might be able to find instability and they don’t routinely do that when it comes to x-ray imaging. Ultrasound imaging on the other hand, you can routinely do that because it’s right at the bedside, it’s easy to do. You tell the patient, either lay still and you move the joint or you tell them to move the joint and you can find the instability. So to me, ultrasound is key because the example would be if you came into a doctor saying you were short of breath and the doctor said, you look like you’re breathing ok. And he or she didn’t even listen to your chest for your lungs or your heart. Like that would be crazy. And for musculoskeletal medicine, you need to use ultrasound in order to really properly look at what’s going on underneath the skin. So to me, that’s how you look at inflammation, instability, where’s the evidence of one or the other, that guides me on the path for what’s the next step.

Now, there are definitely other things that can cause issues. Let’s say if you have a pinched nerve so you need to make sure you’re looking at the wrist, the elbow, the neck, is there any other evidence of where someone could be having pain from another source? Absolutely. But from initial evaluation, inflammation, instability, really, the first way to evaluate someone who’s got hand pains. In this patient’s case, that I’m describing, he has instability of his thumb joints on both sides, likely due to his job as a software engineer that’s causing stress and pain in both of his thumbs. We talked about a strategy for him involving initially some very basic things, working with a hand therapist and over the counter supplements. If that is not enough than likely escalating to platelet rich plasma where we can then treat not only the joint that’s unstable but also the ligaments to improve stability there as well.

So hand pains, really common thing that I see. I think something that we’re going to see a lot more of based on how we’re actually living as humans nowadays on our mobile devices. If you have a hand issue, that’s the right way to pursue it. Make sure you’re getting evaluated for both inflammation and instability, as well as figuring out if you may have a nerve related issue that could be causing hand pains as well. Make sure you’re getting a diagnostic musculoskeletal ultrasound as well. That will get you on the right path to a diagnosis and then eventually treatment.

Wonderful. So as a reminder, we do this live stream twice per week, Mondays and Wednesdays around 12 12:30 Central Standard Time. In addition, I’m doing a webinar today, 4 p.m Central Standard Time, on regenerative medicine treatments for shoulder pain. If you have a rotator cuff issue, shoulder arthritis, or just a shoulder strain, I think this webinar would be very helpful to listen to. I’ll actually be live streaming that on Facebook, Twitter, and YouTube as well. Until we talk again, have a good day and live well, goodbye.

***For evaluation and treatment at Chicago Arthritis and Regenerative Medicine:
https://chicagoarthritis.com/schedule-a-telemedicine-appointment/
MEDICAL ADVICE DISCLAIMER: All content in this message/video/audio broadcast and description including: infor­ma­tion, opinions, con­tent, ref­er­ences and links is for infor­ma­tional pur­poses only. The Author does not pro­vide any med­ical advice on the Site. Access­ing, viewing, read­ing or oth­er­wise using this content does NOT cre­ate a physician-patient rela­tion­ship between you and it’s author. Pro­vid­ing per­sonal or med­ical infor­ma­tion to the Principal author does not cre­ate a physician-patient rela­tion­ship between you and the Principal author or authors. Noth­ing con­tained in this video or it’s description is intended to estab­lish a physician-patient rela­tion­ship, to replace the ser­vices of a trained physi­cian or health care pro­fes­sional, or oth­er­wise to be a sub­sti­tute for pro­fes­sional med­ical advice, diag­no­sis, or treatment. You should con­sult a licensed physi­cian or appropriately-credentialed health care worker in your com­munity in all mat­ters relat­ing to your health.