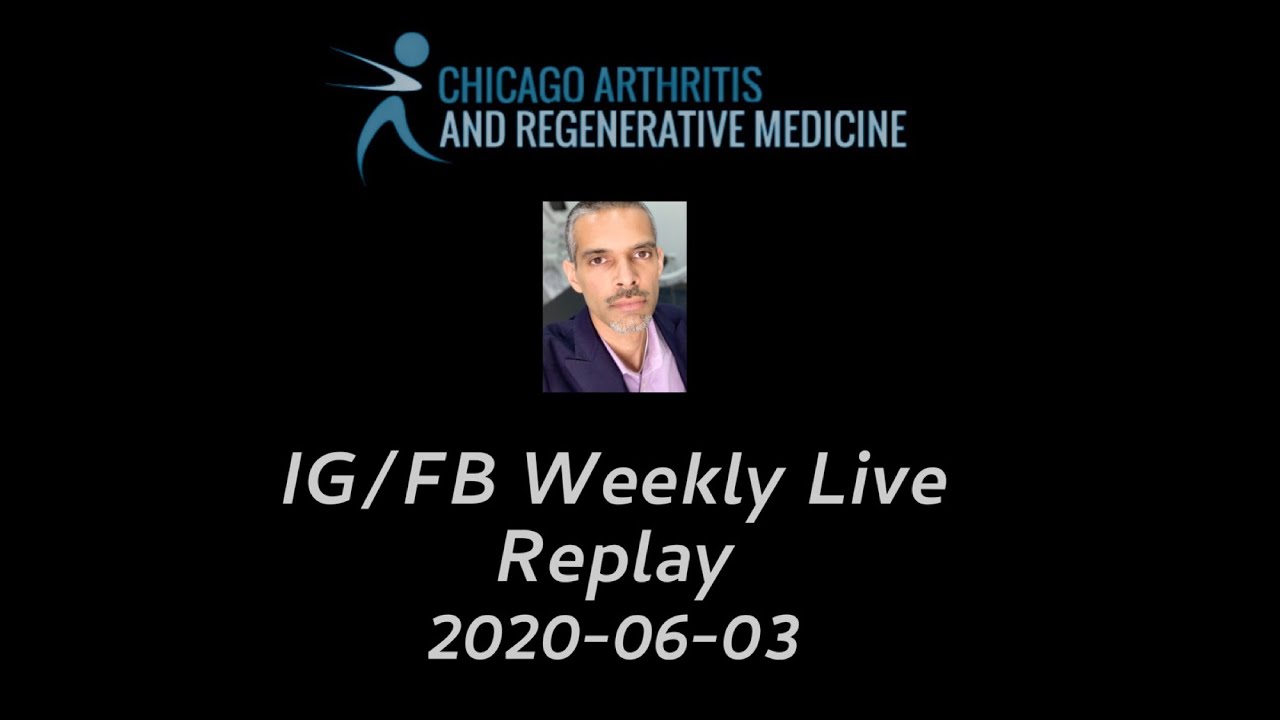 So, I’m going to keep it relatively focused and straightforward today. I normally am focused on obviously talking about medical related issues because am a physician obviously will have something to talk about. But you know the last couple months everything has been so focused on COVID. COVID, COVID COVID! And that’s like everything is affected by that you know, are we talking about you know condition x, what’s going on with COVID. People are on treatment, why? But has COVID affected that, COVID COVID COVID. And at some point, you start to get kind of drained from just talking about everything connected with COVID. But that’s obviously what’s on people’s minds.

And so as you try to stretch out to talk about other things, I think there’s always value in that kind of diversity of thought and thinking and what else is going on. This last week however, you know we have to be honest and the only thing that’s on the mind for a lot of us in the United States is really what’s been going on socially in the world or rather in our country. And it’s relevant from not only the standpoint of that’s what on my mind and that’s what’s on the mind of everyone that works in my office, my colleagues, in the town I live in, my family, but I’m sure all of you as well. But also you know, how do we grow, adapt and how do we get better with what we’re doing? because some of the themes and topics of what’s going on right now affects us in healthcare as well for sure.

Obviously the big picture right now is all about George Floyd and protests related to that and now some of the violent activities related or surrounding that as well. And first and foremost you know, it’s made me think about some things very differently. And you know the video of George Floyd getting killed. I’ve never seen anything quite so dramatic and so vicious to see someone literally get choked out and killed on a video, that’s something. You know, with that said, I mean, we’re constantly nowadays seeing videos of Black Americans black people being shot by either security forces or civilians. And that’s some heavy stuff and so relevant because it affects not only our neighbors, our colleagues, co-workers, employees, team members, all that kind of stuff. But you know some of this even affects, you know my daughter who’s six years old. I’m obviously very disturbed to see some of these kind of things on TV because it is extreme and so dehumanizing. But, you know, on top of that, I’m obviously not thrilled that, you know my six year old daughter is seeing some of these things. And while she hasn’t necessarily seen a video of that of George Floyd being killed, you know, she knows what’s happened. She knows that this happened to somebody by a police officer who is supposed to be there to help. And fortunately, my wife has a level of sophistication and emotional intelligence to have that kind of conversation with her to give some perspective and thought and understanding to it. But you know, what a world that we live in that our kids that young have to be thinking and aware of this. Obviously, incredible. Not a good thing.

On the other hand, you know also just seeing the video of George Floyd being killed, knowing some of the things that he said, not just that he can’t breathe, but even calling out to his mother knowing that his life is ending. I mean, just heartbreaking. Really just amazing. And in my office today, you know we have our weekly meeting. And you know we spent some time talking about this because it affects all of us and it weighs on us and I think talking about it, discussing it is vital to really not to make sense of it, but just sort of deal with it. And so that’s really what’s going on in my mind.
You know, it’s been impressive the nonviolent protests that have happened after that. It’s very encouraging to see the diverse group of people that are involved in that, whether it’s ages, whether it’s racial ethnic groups, all over the country that’s incredibly positive and productive and something that I’m proud of as an American for sure. On the flip side, you know the violence, the riots, the looting that have happened afterward, is devastating and very disappointing and so hurtful to people. And to see what’s happened certainly in the city I live in here in Chicago is shocking. And first and foremost, understand that here at work you know we’re very fortunate that even though we’re located downtown, we’re in an area that is still relatively protected and okay and safe. And so, in our office I mean, we’ve been fine. In fact, we’re starting this week we’ve been working in the office three days per week and starting next week we’re here five days per week. We’ve been fortunate that things have not been more extreme or problematic and so I’m very grateful for that.

But, you know this goes much beyond just you know what we’re doing at work. The reality is that here at work we’ll be okay, we’ll get through this security is fine. But, you know it’s made me think about other things as well. You know, at baseline there are security issues that a lot of our friends, colleagues have to deal with that maybe we don’t always think about. And I think decent people think about, you know what they’ve seen in the last week and say this is unacceptable and having that kind of animosity or dehumanization of another person is unacceptable, especially when it’s based on things like race, ethnicity and gender.

It’s occurred to me that, you know at baseline, obviously, black people have a level of stress and bias that they have to deal with that most of us don’t have to think about. And even if we have our own issues and our own biases that we have to confront on a regular basis you know our black brothers, sisters, colleagues, friends, neighbors, they deal with a level of stress on a daily level that is crazy. And it’s unacceptable.
Since I’ve had my daughter who’s six years old, you know I’ve thought about issues that women deal with in a much different way as well. And, you know at baseline it’s disturbing for me to think that at baseline women have concerns about security every single day. And that the greatest threat to women kind is mankind. That’s terrible. And so even if we don’t have explicit biases, and if we don’t have explicit badness in our heart or in our actions, the implicit biases that so many of us carry and walk around with are making the lives for a lot of our citizens worse, whether it’s for black folks or their ethnic or racial groups and certainly for women as well. That’s unacceptable and I think that’s something that you know as individuals we have to work on.

You know, locally, you know I didn’t grow up in Chicago, I grew up in Western New York, but I’ve been in Chicago for almost 20 years now. And I’ve been in practice since 2008. So for 12 years now. And the vast majority of people that have worked for me have generally grown up and have very deep roots in Metro Chicago, whether that’s North side, South side, West side or the suburbs. And to see their city and their area being burned down is very rough. And it made me realize that for a lot of the people that have spent the time and the effort to help me at work, to help patients and to help my professional career that a lot of them at baseline have security issues based on a neighborhood that they live in, or social issues that they have to deal with, if based on their racial or ethnic background, or security concerns just because they’re women. And the majority of people that work in my office are women. And it strikes me that for them to still be able to deal with that on a daily basis and to come to work, and to show such a high level of professionalism. I mean that takes a lot. And I’m impressed by that. And I’m extremely grateful for that. Because a lot of those things I don’t necessarily have to think about on a daily basis. And I’m impressed that those folks who support me and help me out, are able to push through those things in a way that goes above and beyond what is frequently required or expected. And so I’m extremely grateful for that.

So, you know it’s interesting here in Chicago, we are actually in the next phase of opening up like we’ve had this crazy week where protests are still ongoing, but on a nonviolent basis. Incredible amounts of violence though and yet we are actually opening up to the next phase to account for COVID and I think for businesses that have the wherewithal, the guts to kind of persevere and try to open up now, hats off to them. because that’s not easy. I can tell you here at Chicago Arthritis and Regenerative Medicine, we’ve been very fortunate that we’ve been able to continue at a significant level because my team’s been able to figure out telemedicine at such a high level. And we’re pretty much getting back to full capacity and doing what we need to do.
But this is, you know the new normal. It’s gotta be better than the old normal, because the old normal wasn’t that good. The old normal was a world that made it a lot harder for black folks, for women, and was kind of lousy to begin with. And I think this is an opportunity for us where we have such extreme challenges but we can do extremely well. And how we react to create a better world is how we are defined going forward. So you know, hopefully the new normal is dramatically better than what we’ve been dealing with. Anyway, I know this has been sort off my normal flow and sort of ideas. But this is important.

Reality is we need to do better for each other, but this affects not just things outside the office. The reality is that when you look at health outcomes for black folks, Latinos, even women when it comes to heart disease like their outcomes are worse than other populations. And is that because that there are intrinsic problems, metabolic problems, maybe. But are there differences in terms of how people are treated and dealt with how their health concerns are addressed long-term. If black folks have higher rates of have high blood pressure long-term because they’re not getting the same level of care that the rest of us do. Or if their rates of asthma are worse than other asthmatics then they do worse with coping. And that’s what we see, we see that COVID patients that are having much harder times tend to be blacks and Latinos. And I can’t fix, none of us can fix the macro the global problems, but on an individual basis on a micro basis, we can do better. And I think we all deserve that to live in a world that is better.
So thank you for your time. Have a good day and live well and look forward to talking again next week. Bye bye.