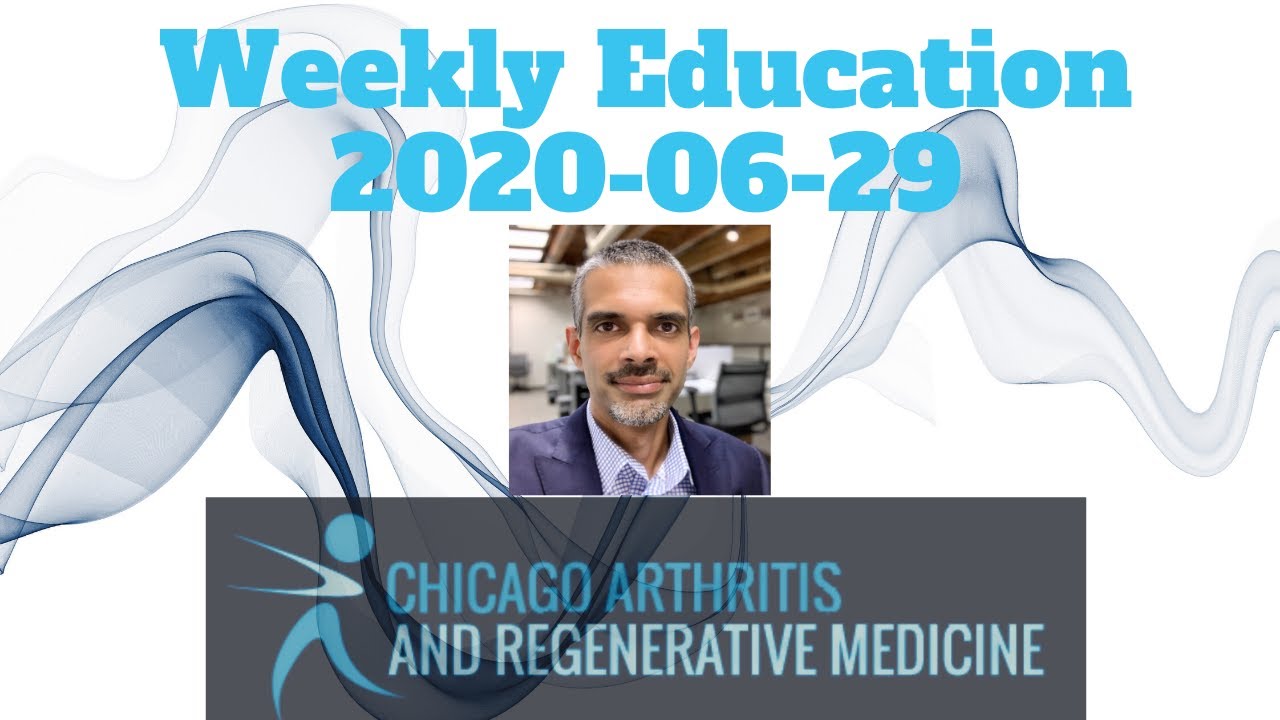 Weekly Education- 20200629
-Expectations post regenerative procedure for arthritis, tendinitis, injuries, and back pain.
-Can prp or bmac help after a prior surgery?

Hello, this is Siddharth Tambar from Chicago Arthritis and Regenerative Medicine. It’s June 29th, 2020, and welcome to our weekly educational meeting. So this meeting is typically me discussing with my team typical issues that come up in the scope of our practice clinically, and discussing how we generally approach those issues, either questions that specific team members have, patients have, or things that I’m seeing, to give a bigger picture perspective in terms of how we handle clinical issues and problems to not only add value to individual patients, but based on how we’re handling them, to also give a sense for how we try to approach medical issues so that the general public gets a sense for what are best practices and how we evaluate things. So today’s going to be a little bit different, namely because I actually have a couple of folks who are on vacation today. So this is going to be more me just discussing directly, questions that have come up in the last week from patients that I think can help to clarify some things and offer some value.

So the first one is from a recently treated patient who had his knee and lower back treated, who had described some discomfort roughly one week after treatment, and discussion I had with him regarding expectations regarding post-treatment care, post-treatment progression and discomfort, and progressive improvement that will occur over time. So in his case, treated about a week ago, and he had sent me a text message over the weekend saying, “Hey, still having some stiffness, what are some expectations?” And so reviewing that with him again to make sure we’re on the same page. So after any sort of regenerative treatment, there is an expectation of inflammation up front. That’s normal. So inflammation for the first two, three days after treatment is expected. That can go out to roughly about a week and that inflammation can get presented as swelling in a joint that’s been treated or a tendon that’s been treated, and more discomfort or even pain for the first few days after treatment. We normally treat that with things that are not going to impair or impact the actual treatment that we’re using. So what I recommend is avoiding anti-inflammatory medications, ice, things of that nature that are meant to reduce inflammation on a more profound level. On the other hand, utilizing things like Tylenol, possibly a short term narcotic, heat, some compression, bracing, manual therapy, all those things are okay, cause they’re not going to limit the effectiveness of what we’re trying to achieve.

So this individual’s gotten over that initial post-treatment discomfort and he’s still having some stiffness and milder discomfort. And what I generally expect is some degree of that sort of stiffness for the first week up to even three weeks. The most I’ve seen is up to four weeks, but normally it’s in that first week to two weeks that people will have that. Again, that’s a normal process of what’s going on here. And that’s because the inflammation component of what we’re trying to trigger with treatment is going to lead to these kind of symptoms. So when you have that initial acute inflammation, that swelling of the structure that’s been treated, you’ll see for that first week or so, there’s still then that lower level inflammatory process that’s bringing in other cells and growth factors that you should expect for the next couple of weeks afterwards. So stiffness immediately afterwards and for the first couple of weeks is normal. If that goes beyond that sort of normal course, then reevaluation may be needed.

So to me, a more significant or concerning aspect would be if someone’s developed fevers. That shouldn’t happen. Some low grade warmth can happen immediately after treating a joint. But it shouldn’t be outright fevers that someone’s having systemically. you would want to make sure that gets checked out to make sure that an individual doesn’t have an infection. In addition, if somebody has something like gout, pseudogout, rheumatoid arthritis, psoriatic arthritis, or any other kind of autoimmune condition, getting a more significant inflammatory component for that first week in a treated joint is certainly common and expected. And I’ve seen that quite often. And that generally comes down after about a week, and then there’s that progressive sort of improvement that will develop. Other things that would have me concerned would be if somebody said after a week, “Hey, knee’s feeling or the joint’s feeling more unstable.” I’d probably want to check that out then at that point. But for the most part, swelling will slowly, progressively improve, and improvement in pain and function I’d want to be hearing at roughly the four to six week mark with a slow, progressive improvement, then going on for the next, roughly three months up to six months. There’s some data showing that with some of these treatments improvement, even up to the first year or so. But my general approach is inflammation, stiffness up front and then slow progressive improvement for the next few months.

Second question that I got was from someone who was interested in learning more about our treatments, who is asking that, she had had surgery for her joint, could this treatment still be helpful? So there’s layers to this question. The first question is obviously what kind of surgery did they have, and then in addition, what’s actually their pain? So I gave an example, I believe last week, on this same broadcast, about how someone who’d had hip replacement surgery had persistent hip pain, and it turned out that his hip pain was actually coming from his SI joint. So in that kind of case where someone’s had surgery, if they still have pain, the exact same pain, perhaps their pain is coming from a different structure. In which case, yes, they can still benefit from treatment because the area that’s already been treated was not actually their pain generating structure.

Number two, let’s say someone’s actually had treatment. Let’s say arthroscopic surgery for the knee or some kind of surgery for the back, and they’re still having pain. Why would they still be having pain, or is the pain different than what they’ve had before, and can they benefit from treatment? So, number one, let’s say someone who’s had arthroscopic surgery, they’ve had some benefit from treatment initially, but they’re still having some discomfort or progressive pain. So that can happen for a number of reasons. Number one, again, their pain is not coming from just that one area that’s been treated. They may have pain that’s coming from chronic instability in the joint. And in which case that’s not something that’s going to get naturally better with routine arthroscopic washout kind of surgery, but can still get better from the regenerative treatments that we offer, whether that’s platelets or bone marrow or even prolotherapy, where if you can improve some of the instability in a soft tissue structure, that that person’s pain and functional impairment may actually get better.

Number two is if you’ve treated an area with surgery, let’s say a lumbar fusion, they can still get what’s called adjacent segment disease, where the areas above and below what’s been treated can still get stressed. And that’s expected in the sense that if you have a surgical procedure that fuses a segment, you still will have the same normal forces and weight that’s going through that area. And instead of now being taken up by that area that’s been fused, it’s now offloaded to the area above or below. And so people can then develop that same degenerative process in that area above and below. Or in some of the soft tissue components over that same segment that had already been fused. And so in that kind of person, now they can still benefit from treatment because now you’re treating those other segments that are now being stressed. Not to mention those same ligaments that were previously in that segment that’s already been fused, those ligaments may be taking on more stress. Just because you’ve taken it off one structure, the other structures around it are now still having to take on the load. So in someone that’s had surgery, if they’re still having pain, yes they can still respond to treatment if their pain is coming from a different structure or if their pain is coming because now the stress has been offloaded to other structures.

So the short answer is yes it’s possible to get benefit from treatment, but the more nuanced answer is, why do you still have pain, what structures are involved, and what else can be helped? Now, without a doubt, if you have, let’s say, something like a knee replacement, and if you still have pain, not only consider is the pain coming from another structure, but you would also want to make sure with your surgeon that there isn’t anything wrong with the hardware that’s in place. That should always be step one. But then also consider whether other structures are problematic. So the more nuanced answer is, get to more of the details and the why, but the short answer is yes you may be able to still benefit from treatment.

Well, this was a shortened version of this week’s educational meeting. I hope those two issues are ones that, if people have been thinking about them or having questions, I hope that gives some additional explanation and answers. And until next week I hope everyone is doing well. Be safe, be healthy, have a good day and live well. Bye bye.

Content- Weekly Education
Weekly educational meeting for the team at Chicago Arthritis and Regenerative Medicine where we discuss the basics of what we do for arthritis, tendinitis, injuries, and back pain.

Contact us for more information or to schedule an appointment:
https://chicagoarthritis.com/contact-us/

MEDICAL ADVICE DISCLAIMER: All content in this message/video/audio broadcast and description including: infor­ma­tion, opinions, con­tent, ref­er­ences and links is for infor­ma­tional pur­poses only. The Author does not pro­vide any med­ical advice on the Site. Access­ing, viewing, read­ing or oth­er­wise using this content does NOT cre­ate a physician-patient rela­tion­ship between you and it’s author. Pro­vid­ing per­sonal or med­ical infor­ma­tion to the Principal author does not cre­ate a physician-patient rela­tion­ship between you and the Principal author or authors. Noth­ing con­tained in this video or it’s description is intended to estab­lish a physician-patient rela­tion­ship, to replace the ser­vices of a trained physi­cian or health care pro­fes­sional, or oth­er­wise to be a sub­sti­tute for pro­fes­sional med­ical advice, diag­no­sis, or treatment. You should con­sult a licensed physi­cian or appropriately-credentialed health care worker in your com­munity in all mat­ters relat­ing to your health.

***About this video***
In this video Siddharth Tambar MD from Chicago Arthritis and Regenerative Medicine discusses expectations post regenerative procedure for arthritis, tendinitis, injuries, and back pain. And also whether prp or bmac treatment can help after a prior surgery?