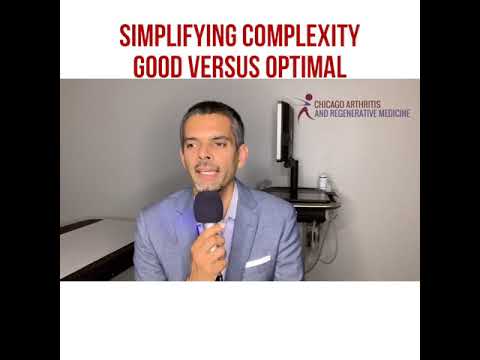 If you’re a busy clinician, seeing complex and challenging cases is fairly common, actually. And I’ve an example of that today, and I think it’s helpful to understand how a physician thinks through, sometimes, complexity. And so the conclusion is, sometimes, or frequently, the solution to complexity is actually to simplify your thinking and frequently, in those kinda cases, it’s not what’s the ideal solution but rather what’s a good solution to make a difference in this person’s life. So the example that I have is a very good friend of mine and my wife. We’ve known her since medical school, so for over 20 years. And she was diagnosed with ankylosing spondylitis about 20 years ago. Mainly based on some classic inflammatory back pain symptoms as well as x-rays that fit that diagnosis.

So she essentially was treated with just a ton of lower back strengthening exercises, she does more planking than any human that I know, and maintaining an ideal body weight. And she’s done really great with that. Over the last year however, she’s developed a lot more neck pain, a lot more fatigue, systemic symptoms, and so, she stopped by the office today to see, you know, what can we do here? So there’s added complexity to her situation. Namely, number one, she also has a diagnosis, in the last few years, of chronic lymphocytic leukemia. So this is the kinda condition where, she doesn’t actually require medication for this at this point, it’s really just monitoring her labs. So there’s really not a potential for a cure for this condition at this point. So she’s someone that has chronic pain in her neck, going down to her shoulders, causing some headaches, she has this existing diagnosis of ankylosing spondylitis, she also has chronic lymphocytic leukemia.

Besides pain, she’s got a lot of fatigue as well as systemic symptoms as well. And so, thinking through this, there’s complexity here. Because a lot of the things that you would traditionally do, you need to reevaluate and rethink that. And the challenges are that in a typical ankylosing spondylitis patient that’s failed basic treatments, meaning manual therapy, physical therapy, chiropractic, some anti-inflammatory supplements, you’re thinking about systemic medications, if needed. That’s really not appropriate in her case because of her chronic lymphocytic leukemia diagnosis.

In addition, when you think about some of the other potential regenerative orthobiologic treatments that could potentially help, you need to keep in mind her cancer diagnosis as well. You’d certainly wanna be careful with BMAC, bone marrow aspirate concentrate, platelet-rich plasma, there’s certain growth factors that can be a potential issue in someone that has an active solid organ cancer. The available data says that if someone has, if they are in a remission state, these kinda treatments are okay to use, probably, and that they’re likely low risk. But this one of those scenarios where there’s complexity.

It’s a bit more of a challenge than just saying, hey, just do this treatment. So for me, the solutions here are, number one, there’s complexity here, but let’s simplify, right? Number one, first and foremost, what is her actual etiology for her pain? Her symptoms, her presentation really fits better, for me, as more of a degenerative etiology and degenerative instability. So she needs some additional imaging to better evaluate that. We’re certainly gonna do that. Number two, she certainly is prone to inflammation issues based on her existing autoimmune diagnosis. So, let’s at least maximize everything else we can do, low risk, before we jump to anything else.

So in her case, it’s going to be maximizing high dose omega-3, turmeric supplementation, let’s see if that at least can help reduce her symptoms by 30, 40%. Let’s see if we can make some kinda dent in what’s going on here before we jump to anything else. Thirdly, I think you have to avoid any of these sort of classic biologic medications that are used for ankylosing spondylitis in her case because of her oncologic issues. I think that’s an automatic. There are some old school medications that could be used but this is someone who really hasn’t been on medication for a long time, she really does not wanna be using chronic NSAIDs, anti-inflammatory medications for the next 20, 30 years.

It just doesn’t make sense. So you then get back to what could really help in a degenerative spine kind of issue? Well, what about dextrose prolotherapy and neuroprolotherapy? Because she does certainly have some myofascial issues as well. What a great, simple, elegant solution here. It may not be the optimal solution, but it’s a pretty good solution, if she needs that. A stepwise approach, getting a little bit more diagnostics, maximizing some of her anti-inflammatory supplements, and then if needed, escalating to a treatment that would be safe in the setting of her CLL diagnosis, and in addition, would probably help in her degenerative spine issue as well. So, emphasizing, taking complexity and simplifying, in terms of diagnostics, thinking, as well as treatment approach, and then finding a good solution, when perhaps an optimal solution would be challenging.