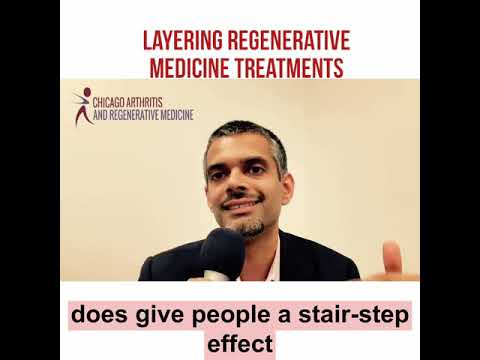 Layering is a really key aspect of how to utilize regenerative medicine to treat arthritis, tendinitis, and orthopedic injuries. I’m gonna give an example of that, of how layering has multiple levels where it can be useful for these treatments. The example I’m giving is a 88-year-old man who’s been a patient of mine for the last three years. He’s a very high-functioning, highly active individual. He works out with a trainer four times per week. He still goes to work at the financial services company that he owns, so he’s an extremely high-functioning, physically, mentally in all ways kind of individual. I saw him originally three years ago for an ankle issue. At that time, he was having pain and swelling in the ankle. He had persistent symptoms despite being in a walking boot as well as physical therapy. That’s how he eventually came to me. So, at that point, I diagnosed him with baseline osteoarthritis in the ankle joint as well as he had tenosynovitis, or inflammation of the posterior tibialis tendon. At that point, we treated him with PRP, a high dose of PRP for the joint, and then a moderate dose of PRP for the tendon. He had about a 50% improvement after one treatment. After the second treatment, he was up to a 90% improvement, and essentially did well for three years.

I saw him recently over the summer where again his ankle was starting to cause him problems, and again causing some functional limitations and limitations with his exercise ability. We once again applied an orthobiologic treatment approach, in this case, utilizing the following: Number one, because he is prone to inflammation, utilizing alpha-2-macroglobulin, which I’m becoming more and more a fan of for treating inflammatory issues in joints and tendons. In addition, again, utilizing a very high dose of platelet-rich plasma for the ankle joint, a moderate dose of platelet-rich plasma for the tendon that had been previously irritated, as well as platelet lysate and dextrose prolotherapy for some of the ligaments around the ankle as well. What’s interesting is that in this time, his ankle was really mainly just dealing with his baseline degenerative osteoarthritis issues in the ankle, as well as instability. The prior inflammation in the tendon had not come back. He does still have some mild tendinopathy in the tendon, so we treated that again as well. Three months out, he’s now 80% better, back to full physical activity, back to full life activity as well. In fact, today, he essentially had a workout first thing in the morning. Popped in the clinic to see me, and then popped back into work to get back to his daily grind as well. So, doing really great for an 88-year-old man.

And the joke that he has is, “Can you give me 10 more years?” And the reality is, everything that he’s doing and the little bit that we can do from the regenerative medicine aspect can also help him live, really, a fulfilling and longer life as well because of his ability to stay physically active. So, the layering concept here is multifold. Number one is the, there’s a really well-understood concept in regenerative medicine now that repeat exposure to cell-based treatments does give people a stair-step effect in terms of improvement, and this individual’s a great case of that, where repeat dosing has given him a longer-term benefit as well. That’s different than other types of orthopedic treatments, injectable treatments where it’s sort of, one treatment, and a person goes back to baseline, and maybe they need another treatment. These kind of orthobiologic treatments build off of themselves, which is a really great benefit of them as well. Number two, layering in terms of the kind of treatments that we’re using, combining different types of orthobiologic treatments to get a synergistic effect, layering them on top of each other. And then lastly, layering the treatment, meaning actually looking at the pathology of what’s going on and realizing that the joint itself is a 360 structure, and treating the different layers of that, from the fascia to the muscles to the tendons to the joint, and really treating everything in between there as well.

Treating in that kind of layered approach gives a person a better response with a regenerative medicine treatment than if you’re only treating the joint alone. So, layered approach with the right kind of orthobiologic treatment options can give somebody a really, really great response. And then lastly, even being able to look at imaging, and in this case, ultrasound, and seeing how that pathology changes over time. Meaning, at one time, a bit more inflammatory, and now definitely much more degenerative, that you can really see how that changes over time and how an orthobiologic approach can be nuanced and adjust to what’s actually going on. So, a really great case and example of all those kind of issues.