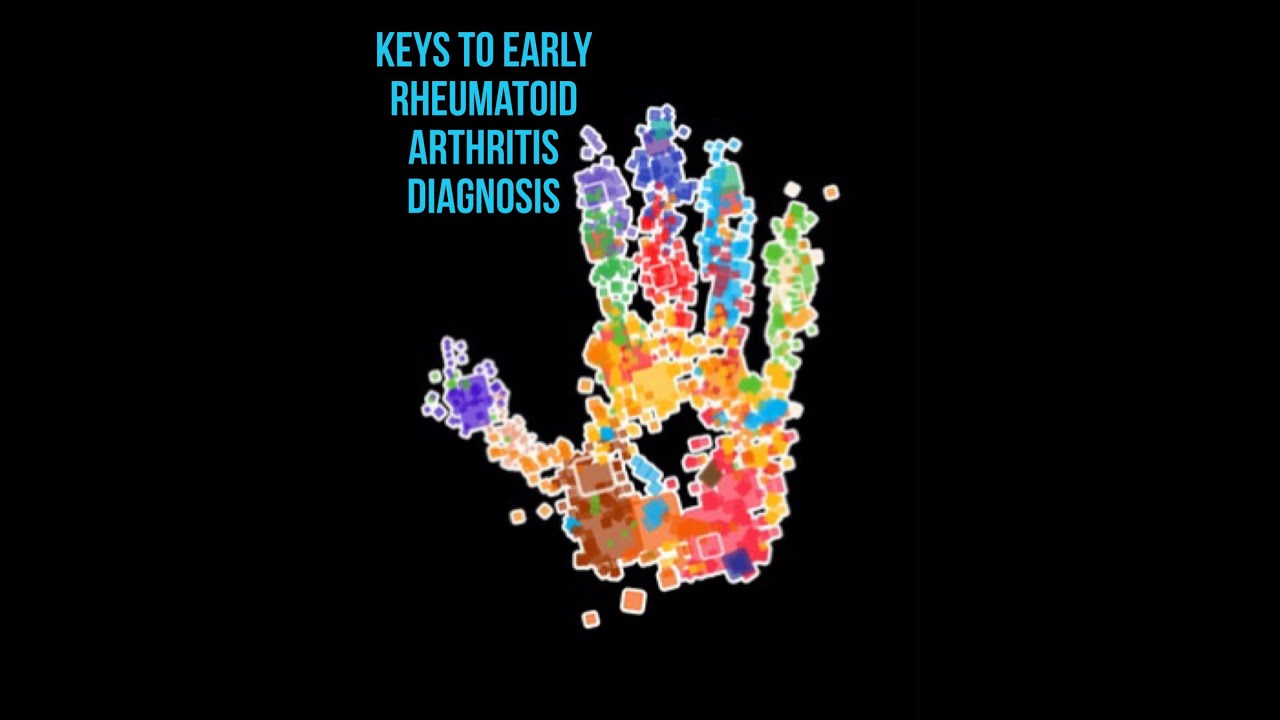 What are the keys to make an early diagnosis of rheumatoid arthritis? This is an important topic for a number of reasons. As a clinical rheumatologist, this is important because this is one of the big conditions that I see and treat, and one that if we can catch people at an early stage, we can make a humongous difference in their life. The good thing is that in the medical community in general, there’s been a progressive awareness of catching this condition early in terms of the importance of it, and today I want to really highlight some of the key ways that you can make an early diagnosis.

So, why is making an early diagnosis important? Well, without a doubt, if you can catch this condition early, you can prevent progression of the condition to more erosive and permanent damage level of disease. That is important because longer term it means that specific individual will have less pain, and better function, and without a doubt if you can catch people in an early stage and treat them appropriately early on, you can actually prevent disability and functional decline as well. So not only is this a huge deal for this one individual patient, but really a huge deal for the overall medical system and even society at large. In addition if you can reduce chronic systemic inflammation, long-term you get a lot of other benefits as well. There is a very clear understanding that in rheumatoid arthritis these individuals have much higher rates of cardiovascular disease as well long-term. The thinking is that chronic inflammation left unchecked is what leads to that progressive cardiovascular disease. And there is limited but early evidence that if you can reduce chronic inflammation in RA patients, that you can actually reduce the cardiovascular burden in these individuals longer term as well.

There are a number of keys when it comes to diagnosis. There are a lot of subtle things to look for and these are some highlights that I think are really essential when you’re catching somebody at an early stage.  Without a doubt, hand and feet symptoms are very key in rheumatoid arthritis patients. Now the reality is that these individuals can have inflammatory arthritis in any joint in the body, but prominent hand and feet symptoms are really pathognomonic for this condition. Having symptoms on both sides is another classic tell, although at an early stage you may not have bilateral findings, it may just be unilateral. Pain that is classically worse first thing in the morning and better with activity, is again another sign of an inflammatory arthritis.

Symptoms that have been greater than six weeks is important in differentiating between acute self limited conditions and more chronic long term conditions such as rheumatoid arthritis. It is helpful to catch them even earlier than that, but understand that there are some other disease mimickers that can present as acute inflammatory arthritis whether that is an actual infected joint, or if that’s just a reactive arthritis, meaning the body’s reaction to either an infection, or a medication that can lead to an inflammatory arthritis. Those conditions are typically short-term, while, rheumatoid arthritis is really classically long-term.

On examination, there are subtle things that you can see, but the classic findings are swollen, warm, and tender joints. Now the challenge is that at an early stage some of those findings may not actually be present. For someone who sees and treats a lot of joint conditions, you can catch some findings of early inflammatory arthritis that are relatively mild and subtle findings, that don’t become quite as obvious later on. Some subtle things on examination that you may be able to catch, even if an individual doesn’t have flagrantly swollen and tender joints, include difficulty making a full grip with their hand. In addition, you may notice that as you squeeze their hands or their feet, that they’ll have tenderness as well.  These are very subtle signs that someone may have an inflammatory arthritis, something that isn’t quite as obvious as what you might see later on.

There are a number of other things that are helpful in this diagnosis as well.  Labs can be helpful, but the reality is that at an early stage of diagnosis, antibody testing can be negative in 50% of patients, includeing the rheumatoid factor and the CCP antibody. Longer term, 25% of these individuals can be antibody negative. That’s important because while the antibody testing are helpful in order to confirm diagnosis, that’s not actually how you make a diagnosis of inflammatory arthritis. Inflammatory arthritis is really diagnosed based on do you see evidence of inflammation in the joints on exam or on imaging.  Moreover, the classic inflammatory lab parameters including sedimentation rate and C-Reactive Protein, may or may not correlate with disease activity. In some people they do, in some people they don’t. Again, it’s a disease marker that can be helpful, but should not fully rule out someone from having an inflammatory arthritis if you have other symptoms and signs objectively on exam that indicate an active inflammatory arthritis.

Regarding imaging, the imaging study that I think is most useful for rheumatoid arthritis, and inflammatory arthritis in general, is Diagnostic Musculoskeletal Ultrasound. For physicians who are dedicated to musculoskeletal health and wellness, in terms of caring for those conditions, musculoskeletal ultrasound is essentially our stethoscope. Without it, you only get a limited picture.  Physical examination is helpful, but ultrasound can pick up a lot of very subtle findings of inflammatory arthritis, including very subtle effusions in the joints that you can not necessarily pick up on examination at an early stage. In addition, ultrasound can pick up what’s called “Power Doppler Uptake”, which is a sign of more aggressive inflammation than just having fluid in the joints. It is a very key diagnostic factor, but in addition a very key prognostic factor, because if you have some of these finding it can indicate a risk for more progressive disease.

Some of the other imaging studies such as X-rays, qre not as helpful at an early stage. X-rays in someone who’s had long standing disease can eventually show erosions, but at an early stage will not and is not as helpful. MRI is the most sensitive study when it comes for looking for subtle inflammatory arthritis, but the reality is if you weigh the cost associated with MRI versus ultrasound versus the slight increase in sensitivity for picking up inflammatory arthritis, ultrasound still works out as being the better imaging modality.

What are the next steps that you should take if a diagnosis of rheumatoid arthritis is suspected or inflammatory arthritis is detected. Without a doubt, a rapid referral to rheumatology is necessary, and again that’s because if you can get disease modifying treatment started at an early stage, you can prevent progression of this condition. Now the reality is that that referral should be within two weeks, and if it’s taking more than a month, think about having a conversation with your local rheumatologist to encourage them to see that individual a little bit earlier. In terms of medications, there are classic meds that are used, anti-inflammatory medications, Nsaids, ibuprofen, Advil, Aleve, Celebre. realistically these should be minimized long-term. While these have been classically used in abundance, and overused in our inflammatory arthritis patients, they should be minimized due to many many side effects. Steroids, while they have a ton of long-term side effects, short-term usage to help control inflammation as it’s decided what disease modifying treatment to use is okay, and it’s appropriate to give an individual quick acting relief, as well as help them to function better.

Without a doubt, getting started on a disease modifying treatment is the most important first step when it comes to treating rheumatoid arthritis. Methotrexate is the classic medication at this stage. There can sometimes be an argument made for people that have mild inflammatory arthritis to utilize a milder medication like Plaquenil, but Methotrexate is still first line, and then relatively quickly escalating to a biologic medication, which are stronger and generally do a better job if someone is failing Methotrexate.

Long-term there are other things that patients can do as well, including focusing on an anti-inflammatory diet, which includes a relatively low carbohydrate diet, avoiding refined sugars, minimizing red meat, and being a bit more plant based. Supplements such as Omega 3 in high dosage, as well as Turmeric and Curcumin can help with inflammatory arthritis as well as pain.  Certainly exercise as tolerated to maintain muscle strength, and mobility is key in inflammatory arthritis as well.

That’s the basics, that’s how you make a quick diagnosis in terms of catching someone who may have an early rheumatoid arthritis diagnosis, some subtle examination findings, classic symptoms, labs may or may not be absolutely correct and correlating, but a rapid referral to a Rheumatologist to then help make a more firm diagnosis utilizing more modern imaging technologies including diagnostic musculoskeletal ultrasound.  And an emphasis of getting that individual plugged in and starting treatment early is key for improving this condition, improving their life, and making a big difference.